I picked up some 15mm colonials recently. I managed to paint some up, but still haven't based them... 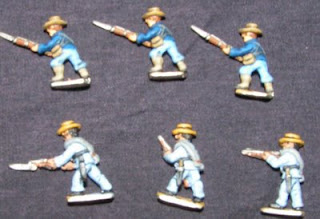 First up are some 15mm Spanish American War figures from TVAG. The top three are US Volunteer Infantry. There seems to be only one pose for the rank and file, and one pose of officer and standard bearer (not pictured). 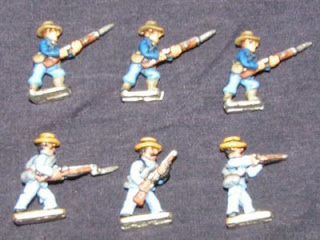 The bottom three are Spanish regular infantry in field dress. There seems to be 3 poses for the rank and file (shown). You can't see it in the photos, but I attempted the rayadillo with a light duck blue and some small, fine white lines to give the impression of pinstriping. I didn't take much effort and I am pleased with the impression it gives. 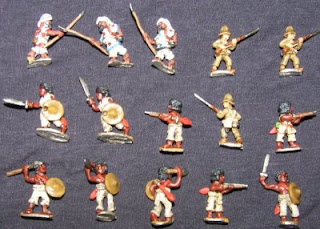 Last up are some 15mm Stone Mountain Sudan range. The upper left 3 are Mahdi ansar with spear (one pose per pack). The upper right shows some British in advancing pose (also one pose variation). The bottom 2 rows show the mixed Fuzzy Wuzzy pack of spear, sword and rifle armed warriors. Very nice figures.
Posted by Le Coq Fou at 5:42 PM No comments: