The Mexican American War (as well as the Texas War of Independence) have always piqued my interest as far as gaming and painting are concerned. I started off with 15mm, mostly Musket Miniatures and MiniFigs and even some Frontier. Then I also began collecting 25/28mm with Old Glory, Dixon, Cannon Fodder and First Corps....I ultimately sold these off and re-invested in 15mm when Old Glory released their ranges. Despite all of these starts and stops, I never really came close to finishing the project.

Recently Cracker Line released a Mexican American War range in 10mm called "So Far From God". 10mm is my preferred scale so I jumped in and bought some packs. After that, I picked a battle to model my armies after. I went with Palo Alto because the armies were small and can also be used for Resaca De la Palma. The armies should also provide me a nice starting point if I ever want to collect for Buena Vista. I picked up the book "On the Prairie of Palo Alto" to get in the proper mood. There aren't many books that focus on the first battle and this one is interesting because it also analyzed the geographical and archaeological aspects of the battle. 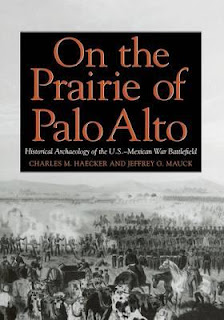 Here are some photos of Mexican Light Mounted Regiment. I used the regular Mexican line cavalry in shako packs since the uniform was pretty much the same style. 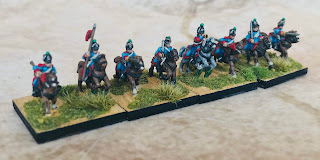 They are based on 30mm squares with two riders per base. 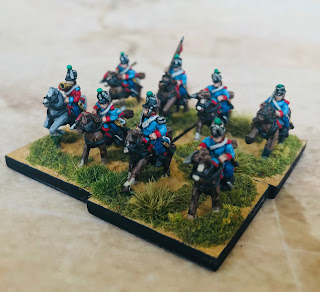 Next up is the 10th Line. The unit had purple cuffs and lapels, I wanted a color that would stand apart from the dark blue coats so I went with a light purple. I like the look.

Four bases (all 30mm squares) with 6 foot per base. I picked up 15mm flags with an adhesive backing from Historicon. I repainted the red and green portions to give a little more texture and tidy up the cut edges. 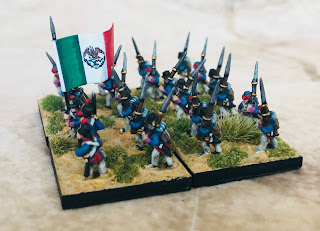 So far, I have two line regiments (1st and 10th) and the Light Mounted. I have the 2nd Light Infantry partially painted and hope to upload photos of them soon.

Here is a picture of the 1st Line in column. As you can see the sculpts (Robi Baker sculpts) have alot of detail. They are incredibly easy to paint, I'm not sure why they seem easier than other sculpts but they paint fast for me. There are various poses in different types of shako and even fatigue caps. Give a nice varied look. 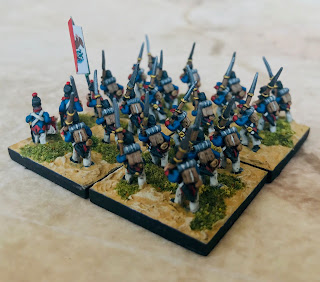 The 1st from the front. You can see the yellow lapels and red collars and cuffs from this angle. 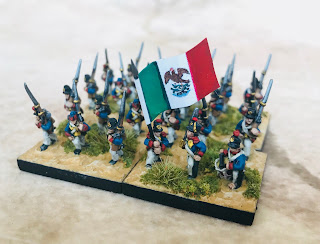 I also picked up some American infantry figures, they are nice but of a different sculpting style than the Robi Baker-sculpted Mexicans. While compatible, I decided to go a different route for the American army. The Mexican Light Infantry in fatigue dress have a very similar uniform to American regulars. Some small modifications should allow me to use Mexican Lights in fatigues as American rank and file. Unfortunately I will have to find something for the officers, drummers and flag bearers. As it turns out, Robi sculpted Blaze Away miniatures (now owned by Lancashire) ACW range. I paln to buy some Federal command packs and use green stuff to make fatigue caps suitable for the MAW. I may have to make a few more conversions to the figures but in 10mm, they don't have to be perfect. I plan to keep you updated.

As for rules, I have never really found one I loved. I think as of right now, I will try both Rank and File and Field of Battle II. R&F units can have varied numbers of bases depending on unit strength. FoBII uses a standard 4 base unit (which is how I am modelling my units). If I opt for Rank and File, I will probably add on additional bases to my units to reflect their strength at the time of the battle.