A member of my gaming group, Alex, agreed to play some Irregular Wars with me at the club. Our first attempt last week was aborted when we started too late and had to end the game a draw. This past Thursday, we started at a proper hour. Alex took control of the English Adventurers and I had control of the fierce Iroquois. Alex's English battle was composed of a company of Gentlemen Adventurers (including his Lord) and 4 companies of Adventurers. For his two optional companies, Alex chose the "Murderer" (ship's gun) and some Gentlemen Pike over D2 Longbow and D2 Militia Pike options. This resulted him in fielding a small compact force with some punch to it. My Iroquois had two Noble Warriors'companies and three Scouts' companies with D6 Warriors and D4 Scouts as options. I rolled for all six Warrior companies and three Scouts. This was a meeting engagement between explorers and "naturals": 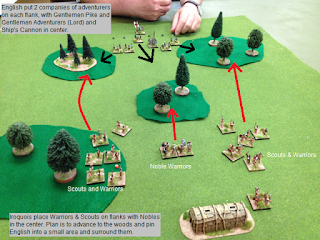 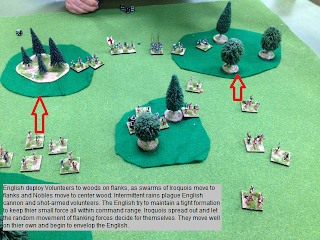 Lots of rain allowed my Iroquois to advance without much resistance from English shot and cannon. Additionally, most of my flanks were out of command reach but rolled fortuitously on the "impetuous move" chart. Irregular Wars is an extremely simple rule set, but has lots of nuance and period feel with weather, terrain, disease and command & control issues. 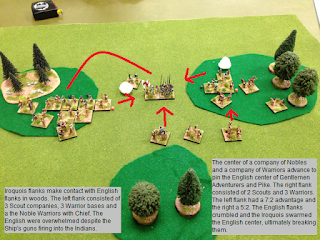 My Iroquois managed to overwhelm Alex's flanks in the woods and ultimately swarm the English center. Upon reading the rules, we missed some things (Natives reacting to firearms modifier) and some bad turns of events (lots of rain) doomed Alex's intrepid English interlopers. We both had lots of fun regardless and plan to play again. I really enjoy these rules and look forward to painting up some more armies. Next up are some Colonial Spanish to face Drake and his Great Expedition!