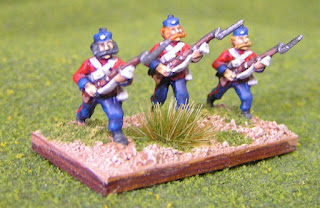 After years on the backburner, I have finally decided to embark on my 15mm Fenian project. One of the problems, is that there isn't a dedicated range for the Fenian Invasions. The good news is that you can use some Maori Wars ranges, the bad news is that Maori ranges won't provide everything and there aren't many 15mm Maori ranges (maybe two). These are BattleLines 15mm painted up as the 13th Hamilton Militia (present at the Battle of Ridgeway). 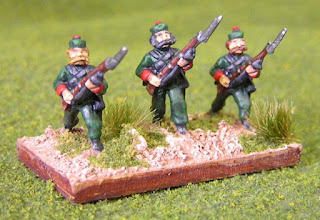 The bulk of the Canadian force present at Ridgeway were the 2nd Battalion, Queens Own Rifles (QoR). The QoR were essentially uniformed and equipped the same as the 13th Hamilton, but in Rifle Green as opposed to the Redcoat of infantry. The Battle Lines range are all in the pillbox cap, while probably worn at Ridgeway, the official headgear was the quilted shako. I plan to find some figures with a suitable shako and then conduct some head swaps. 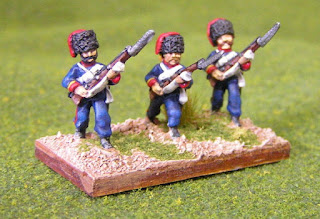 These chaps are the Welland Canal Field Battery. So, where are the guns? Apparently due to haphazard care and security of their Armstrong guns, the British military took them from them as punishment. They continued their duties as infantry. These figures were a small challenge. I couldn't find figures in busbies wearing 1860s British uniform. I took Battle Lines infantry and conducted a head swap with 18mm Crimean War Royal Horse Artillery (Eureka). Maybe not perfect, but I am pleased with the results. While not present at Ridgeway, the Welland Canal Field Battery were closeby, and the Canadians will need all the help they can get to have a chance at the refight of Ridgeway! 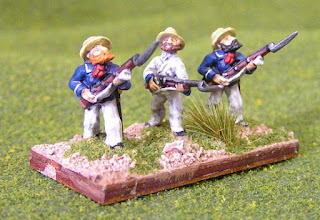 Here we have members of the Dunneville Naval Brigade. They were assigned to the tug WT Robb. The Naval Brigade was with the Welland Canal Field Battery at Fort Erie and will serve as reinforcements for Ridgeway.

Hopefully I will have some more Canadians converted and painted up soon. If anyone knows a good source for 15mm/18mm quilted shako proxies, let me know. Thanks!
Posted by Le Coq Fou at 7:55 PM No comments: