A Pledge, a Budget and a Plan

My New Year's resolution is to paint more than I purchase on the year, and to try to keep my monthly figure expenditure around $30 per month. That limit doesn't include books, magazines and supplies, but I will also try to keep those purchases to a minimum as well. It will be difficult, but progress and savings need to be made! 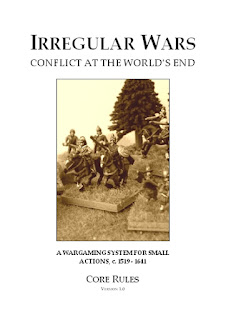 That is 64 Foot, 4 horse and 2 artillery pieces with crew. For a slow painter like me, that will be a tough number to surpass for the month! I went slightly over-budget, but close enough and it is the thought that counts! These figures will go towards my English Adventurer battle. I plan on using them as one of the primary enemies for my 15mm Woodland Indians. Hopefully I can collect some Spanish colonials, French Huguenots and Dutch merchantmen for them to get into scrapes with!
Posted by Le Coq Fou at 1:05 PM No comments:

I have always been interested in the Age of Discovery and the wargaming potential of the conflicts. The Irregular Wars ruleset allows me to recreate these battles. This past October I visited Jamestown, Virginia which rekindled my interest for the period. Unfortunately, there is no dedicated 15mm range of Powhatan Indians. I opted to go with the Khurasan "pre-contact" Iroquois as my generic Eastern Woodlands Indian battle. For Irregular Wars, the Woodland Indians have three primary combatant types: Veteran Warriors, Warriors and Scouts. I decided to use the Khurasan Noble Warriors with armor as my Veterans, a mix of bow, club and shield for my Warriors and lighter equipped Iroquois and allied Indians as my Scouts. Thus far, I have seven bases (or "companies") complete. I will be adding more later. 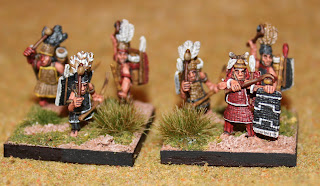 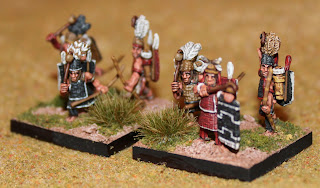 I am awaiting an order of Freikorps Tudor English to start off my English Adventurer Battle. I am also contemplating an order of East Riding Miniatures and Grumpy's to supplement the Freikorps. In the meantime, I will continue to work on the Woodland Indians and some Spanish Conquistadors.

Its been almost a year since I last posted, at the request of a friend and fellow gamer I begin 2013 with a post and a "pledge"; the pledge will be to try my utmost to keep wargaming expenditures around $30 per month (which is a drastic reduction). So,what have I been doing? One is buying a lot and painting a modest amount of 10mm figures for Neil Thomas' 19th Century European Wargaming rules. Specifically, the Risorgimento and the First Schleswig War: 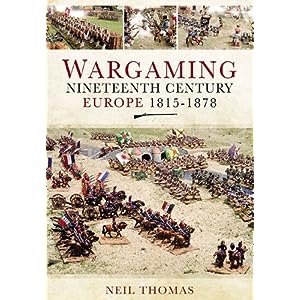