Off Topic: A Dragon Ogre

In high school, I played a good amount of Warhammer. I owned an Orc and Goblin army. My buddy had Dwarfs (or is it Dwarves?) and Chaos. He had a few dragon ogres and I always thought they were really cool sculpts. Years later, I decided to pick some up on ebay for relatively cheap. One of the sculpts was missing a hand so I bought a cheap Reaper sculpt (kobold maybe?) and used the sculpt's clenched fist with shield as a replacement for the dragon ogre. 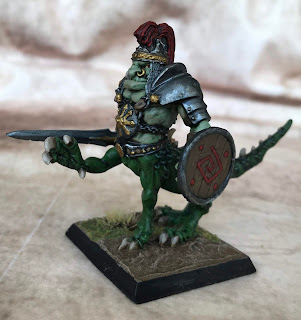 Anyway, here is the finished dragon ogre. I painted a simple design on the shield which was inspired by the "time is a flat circle" imagery of the TV series True Detective. 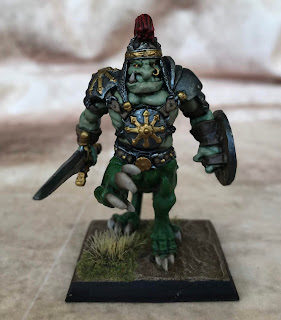 I gave the upper torso of the dragon ogre a greenish flesh tone which was achieved with a pale green followed by a green ink and an over brush of pale green mixed with pale flesh color. I'm pleased with the result but I am less pleased with the ogre's eyes. I am never good at eyes and rarely paint them but with a model this big I couldn't avoid it. I hope to tackle the rest of my dragon ogres, I think I have 5. Ultimately, I'd like to make an oldhammer chaos army comprised of dragon ogres and centaur type beasts. They'd have to be all OOP sculpts but not necessarily GW. We'll see.
Posted by Le Coq Fou at 1:05 PM No comments:

I've had these units painted up for a while, but have been delayed in basing them. Finally got to that last night and snapped some photos of them today. First up is the 2nd Light Infantry. 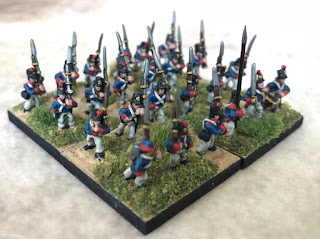 Next up are the Tampico Coast Guard. I wanted to make the Coast Guard look a little different than the regular line infantry so I mixed in sculpts of the 4th Light Infantry. They lack backpacks and some even lack shoes. I feel like they add some character and make the Coast Guard battalion a little more "rag tag" in nature which was my intent. 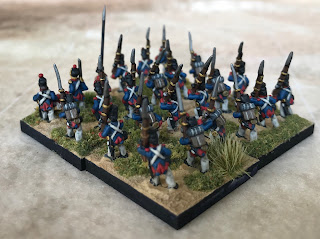 You can see the lack of backpacks on the 4th Light Infantry sculpts. Next up in this project is the 7th Line Cavalry, which should make a colorful contribution to the Mexican force with their red tunics and green facings.
Posted by Le Coq Fou at 12:54 PM No comments: