I've mostly been working on my 10mm Punic Wars based for "To The Strongest" (which I will ultimately post pictures of once complete). A little side project has been 15mm Afghan warlord armies. I plan on collecting two rival warlord armies and using AK47 Republic with them. I have motley collection of Flytrap, Flashpoint, Fireforce, Irregular and CP Models Afgans.

Anyway, here is my first vehicle for the project. Its a PSC T-55 with some Old Glory stowage. The two tank riders and the chap manning the Dushka HMG are Old Glory Technical crew. The pensive looking tank commander scratching his beard is a Flytrap civilian. 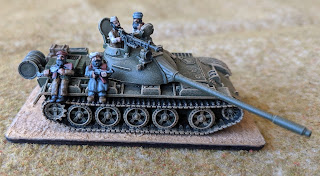 Same tank, different angle. I magnetized the turret which was tricky but well worth it. Once the tank was assembled, I primed it Soviet green and painted the non-green areas. Next came a diluted wash of Army Painter Strong and Dark shades mixed 50/50 with some GW Lahmian Medum. After it dried, I glued to the base and heavily drybrushed it with various shades of dirt colored paints. Final step was attaching the crew and riders. I might add some more gear and hit it with a final coat of matte varnish. 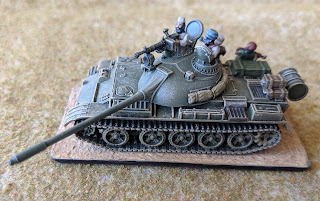 I have to say, I was really looking forward to this project. The T-55 is one of my favorite tanks, its so iconic and has been used in alot of niche and lesser known conflicts. I love the look of old, battered, 3rd World T-55s with various kit and loot strapped on to them. I feel like this model captures that look although I probably need to add more junk to the storage! 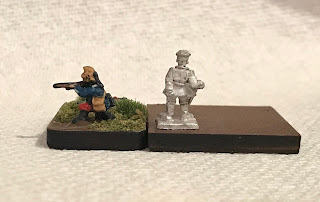 At the request of another gamer, here is a quick comparison of a Kallistra dragoon and a Great Escape British Officer. They go well together. I’d say the Kallistra is a little more slender in heft. I apologize for the comparison using a kneeling figure and a standing figure but I can seem to find my unpainted WW1 lead at the moment. 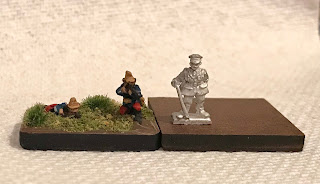 Here is the Mexican 7th Line Cavalry in their post-1839 regulation uniforms. I opted to give them lighter tan and tan/white horses. Not sure if the buglers rode grey or white horses or if they wore reversed colored tunics. 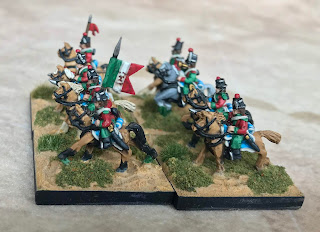 Another picture. These photos were taken with an iPhone and the light wasn't perfect but I wanted to get some pictures up.

Here is a closeup of a lancer stand. 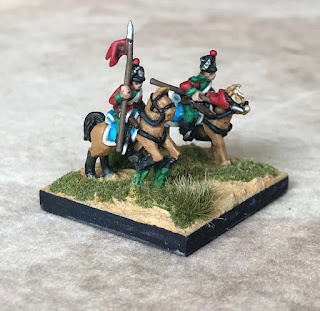 Same stand from a different angle. 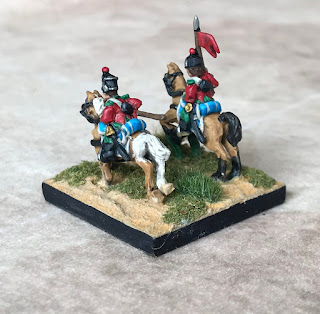 Below is the 8th Line Cavalry. 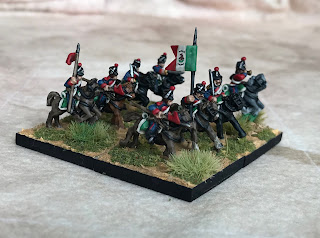 And here is another close-up, this time of the 8th's standard bearer. 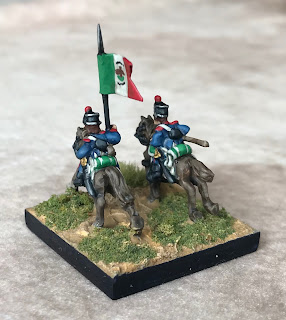 Cracker Line/Good Ground Miniatures recently released some artillery for the Mexicans. I picked some up and added them to my Palo Alto collection. 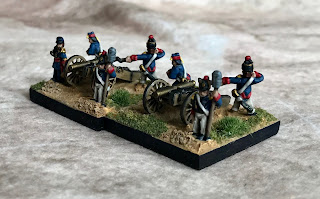 I have a total of 6 stands of artillery which will depict three Mexican batteries. 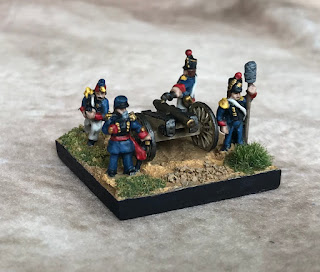 I painted the guns in unpainted, sun faded wood with dirty metal facings. 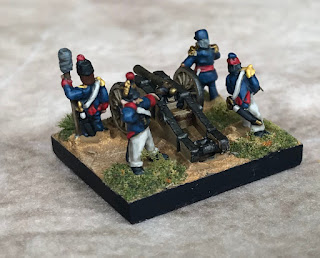 Here are some of my American regulars. So far I have 2 infantry regiments and one cavalry regiment. I opted to use the Mexican light infantry in fatigue uniforms from Cracker Line's range. I trimmed off the cap tassels and bugle badges. Most of the swords were removed and knapsack bags were added with green stuff.

As you can see, I gave one unit the national flag and the other a regimental flag. 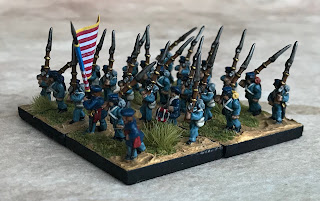 Some closeups of the infantry. The command figures (officer, standard bearer and drummer) are from Blaze Away's ACW Union figures. They were also sculpted by Robi Baker, so there is a continuity in sculpt size and style. I lopped off kepi tops and added a green stuff blob to give the impression of the 1839 cap. 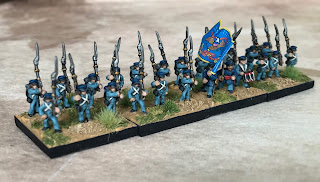 I think the converted Mexican light infantry and the Blaze Away command give a good proxy for the US Infantry that are consistent with the Cracker Line Mexican's. 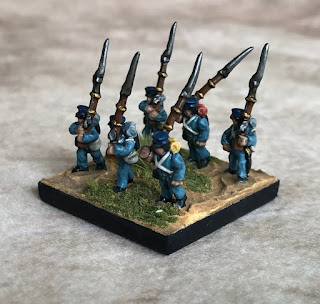 One last look at the converted infantry.

And here we have some American dragoons. Again, these are converted Blaze Away Union cavalry. The only thing converted wit them is the kepi has been converted to an 1839 forage cap via nippers, file and green stuff. 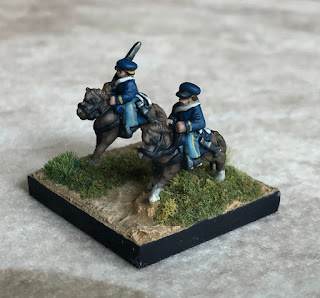 The Blaze Away cavalry have slightly smaller mounts and a little less fine detail but look the part when painted up.

I just bought some of the newly released American Flying Artillery and Mexican Generals. They will be next on the painting list followed by some "red leg" American infantry.

I have always been interested in the Wars of the First and Second Coalitions, especially the the chaotic early years that upended the Bourbon King. I’m obviously a big fan of 10mm so when I saw an eBay auction for some French and Austrians, I jumped on the opportunity and bought them at a very good price.

I painted up a Demi Brigade featuring 2 battalions of Les Bleus and a battalion of Les Blancs. The bases are 40mm squares.

I added dice trays in the back of the bases to denote unit status. I started this project with the idea that I wanted a base to be a battalion and then looked for an appropriate ruleset that appealed to me. I found a set called “For King or Empress” which is designed for the Seven Years War. I thought a SYW set would be best for the War of the First Coalition, as the armies of the Ancien Regime still fought in old linear tactics. I would then tweak the French Army rules and stats to give them their unique tactics and characteristics. I downloaded the FKoE rules and liked them so much that I bought  the print version. 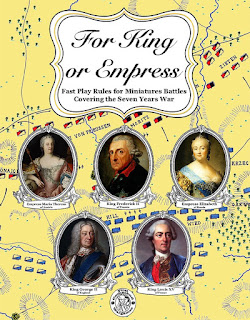 I still have a ways to go on this project but I have a clear plan and a ruleset (and one Demi Brigade) going forward. In the meantime, here are some closeups of the figures: 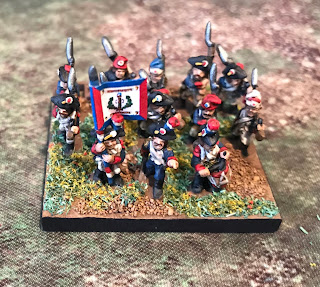 The Pendraken figures are some interesting sculpts and I absolutely love them. Not everyone’s cup of tea with their cartoonish, anatomically incorrect proportions but they are right up my alley. I mixed in a lot of phrigian caps and barrack caps in with the bicornes. There are also some striped pants, French  Revolutionary Armies need striped pants for the Sans Culottes! 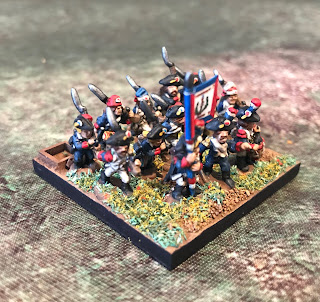 Another picture of Les Bleus. 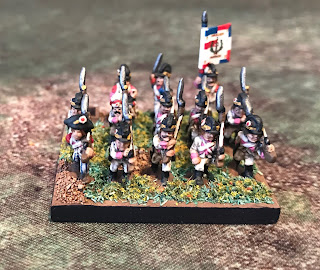 Here are some Les Blancs. They are sporting the flag of the 9th Demi Brigade’s 2nd battalion. In hindsight, I forgot to see what this unit’s proper facing color was. Oh well! 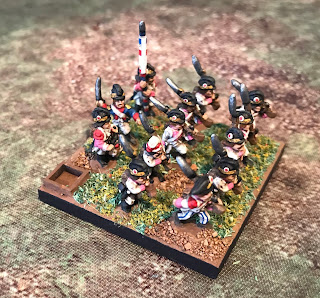 I took some liberties with the flags, facings and other uniform items but this is more of a fun project than a serious one. I enjoyed painting up the figures and look forward to more. I will add some Magister Militum figures in for cavalry and allies for the Austrians. Any thoughts who I should use as allies? Dutch? German states of the HRE? Sardinians?