I have tons of 10mm figures from 19th Century Europe: Prussians and Austrians for 1866, Danes and Germans for the First Schleswig War, Papal and Garabaldini for the Risorgimento, and on and on... Unfortunately, most is unpainted. Anyway, here are some 10mm Danes and Schleswig Holstein foot:

Gotta love the pretty "chocolate box" uniforms of these guys. The figures are based for Neil Thomas rules. I need to paint more of these 10mm figures, 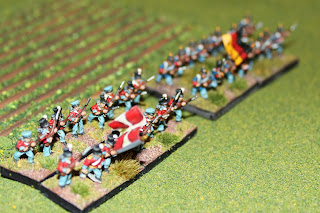 I like cast-on flags in 10mm, some of Pendraken's ranges have them, others don't. The Schleswig range doesn't have cast-on flags. I decided to add flags made from the tin seals on coffee cans. It is a thick foil and I am happy with the result.

This is a very old project from a decade ago: 6mm Maxmillian Adventure. Figures are Irregular, I thought of using DBA variant for the Civil War. The guys on the left are Imperial Mexican foot followed by Imperial Lancers, Austrian Legion (maybe Belgian, not sure) and finally Republican Mexicans. Nice little figures. The thing about Irregular 6mm; unpainted they look like little blobs of lead but when painted (and they paint easy) they really give a good depiction of what they are supposed to be.

I have a very complicated love/hate affair with Jacobites. Years ago, I collected 28mm Highlanders and ultimately sold them off after painting a few foot units and some horse. After that, I painted a decent amount of 15mm Jacobites for Warfare in the Age of Reason. Those two were sold off in order to finance other projects. There were several packs of Old Glory English and Jacobites in my closet and after years remaining in their original packaging, I decided to paint some using a new technique for me. I primed tan then inked the figures with Vallejo "Sepia" ink. This allows me to see the detail on the sculpts and the inked tan hides any spots that I miss. Thus far I have finished two foot and one dragoon unit, based on 25mm squares for Maurice:

I have yet to add flags for my foot, partly because I haven't found flags I like. Most 15mm flags seem way too small for my taste. I will have to either print my own or use 20mm flags.

I painted the yellow faced unit first and didn't really give grenadiers' mitre caps their appropriate due. I painted the buff-faced unit's grenadiers with a little more love.

I have to say that these Old Glory sculpts are very, very nice. They are also extremely easy to paint. 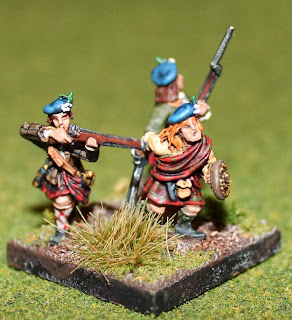 So, back to the "hate" part of my relationship with the Jacobites...Plaid! In 15mm, plaid can be a pain. I usually paint plaid with a simple pattern and limit the amount of plaid to a minimum. Most of my plaid is on a red or green background. The pattern is "painted" in with a black Micron ink pen. I try to keep non-black patterns to minimum. 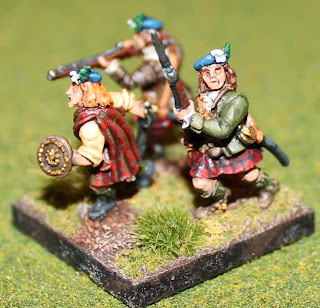 This is the only finished base of Highlanders so far. I have half of the Royal Ecossais and some more Highlanders painted but not yet based. I hope to be more regular with my blog updates in the future.

Its been a while since I posted, although this doesn't mean I haven't been painting and gaming (and of course adding unpainted lead to my collection). A good many games of Irregular Wars have been played by the Dulles Area Historical Gaming Society (DAHGS). My Colonial Spanish:

Another shot of the Colonial Spanish, with my "Spanish" villa in the background. The English would love to pay those buildings a visit.

English Adventurers: Gentlemen Pike, Ship's Gun, Billmen (in Tudor green livery), Longbow, Militia Pike, Gentlemen Adventurers, Adventurers. Still need to pick up some Cimmaroons and make a sniper fig. When the Khurasan Elizabethans are released, I will pick up a good amount to make into a continental English army. 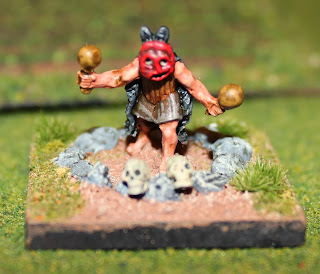 I've added to my Indians, more scouts, warriors and noblemen in wooden armor. I also added this shaman. He is a Tinglit (sp?) shaman from Eureka, I made his daggers into rattles and gave him an Iroquois mask and a fur cloak. Some skulls of vanquished enemies in front of him. I hope to paint up my Irish next, and the Scottish/English Borderers after that.