Just finished some "English Adventurers" for Irregular Wars. The figures are mostly QRF "Tudor Wars", with a mix of QRF "Elizabethan". Khurasan Spanish Conquistadors and Grumpy Colonial Portuguese. They are depicting early English forays into the New World (John Rut, Roanoke and even Jamestowne). The figures are probably more suited for mid 16th century, but I like the sculpts and they can do for later periods, in my opinion.

Above and below: Five stands of "Adventurers", which I depicted with two shot figures and one melee figure. Accompanying those Adventurers is a small artillery piece, a "Murderer" and the command, a base of "Gentlemen". The commander is a QRF figure with a QR miniatures pistol added. 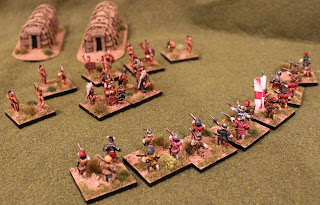 The English face off against my Iroquois clad in wooden armor. 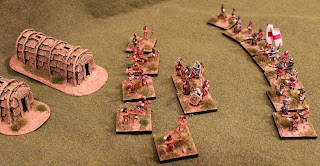 Hopefully, I will get my first bona-fide battle in at the local gaming club. I plan to paint up some more Iroquois and also some more Adventurer bases as well as some pike elements for the English navigators...