Have been able to make slow but consistent progress on my Irregular Wars and '45 projects. I try to work on a few projects at once because I can lose interest and develop painter's block of sorts if I am only doing one project...which makes it tedious (and I paint for enjoyment).

I finished my first three bases for my Irregular Wars' "Mere Irish". These are the D3 optional companies of Bonnachts. In order to differentiate them from the Kern and Gallowglass, I used figures in the leine and armed with axes. Majority are QRF's Bonnacht, with one Corvus Belli kern. I gave him an axe I found in a QRF gallowglass pack. I painted these guys colorful but with the colors toned down to be less bright. I like how they came out, especially the bases. 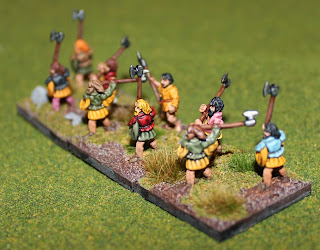 The Corvus Belli kern is in the rear center without the jacket. The QRF figures are nice, simple sculpts...extremely easy to paint.

Next up are some 15mm Scots. I think the flag depicts an Atholl regiment, but I am not certain. I found some old flags in my flag bin and after mounting it, I painted over it. I still need to find some more flags... The figures are mostly Old Glory with some Roundway mixed in. 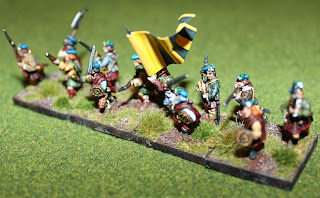 Here is a rear view of the regiment. Every figure has at least (and typically only) one plaid article of clothing. Some got multiple plaids. The plaids are typically a black grid on muted red or green background. Some have other grid colors and even dots at line intersection. For any dark grid lines, I use a Micron gel ink pen. 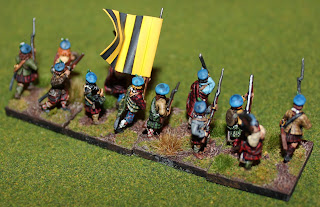 I have completed half of my Royal Ecossais. There seems to be much debate about what the Ecossais wore during the '45. I opted for Old Glory SYW French without turnbacks. The main reason why I chose these figures was because I already owned a pack of these (will also be using them for the Irish Piquets) and because I couldn't find figures in bonnets and short coats that I liked. 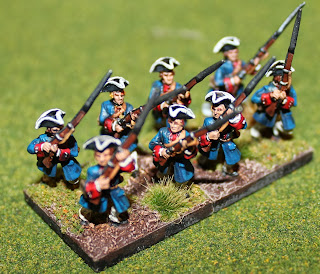 With this Jacobite regiment complete, I figure that I need 5 more regiments of highlanders, the Royal Ecossais, Irish Piquets and maybe a lowland regiment. That would give me 7-8 infantry units, along with one planned cavalry regiment and some artillery. That is a lot of Plaid! 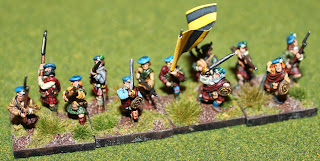