I have always been interested in "wargaming" gladiator combat but never found rules that I liked. Recently I purchased "Blood, Sweat and Cheers" by Nic Wright. Nic is the author of one of my favorite rulesets, "Irregular Wars" so I felt pretty confident I would like his take on Gladiator combat. BSC is a card driven game with two pages of rules, thats the type of game design I like! Next I needed some Gladiators, I preferred Crusader Miniatures range as they don't look fanciful and have a great style to the sculpting. I am not a fan of 28mm in general but these were very enjoyable to paint up. Here are my first three completed fighters: 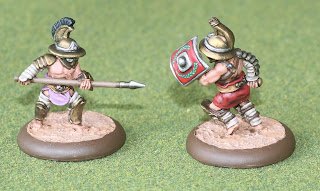 Hoplomachus on the left and Thraex on the right. 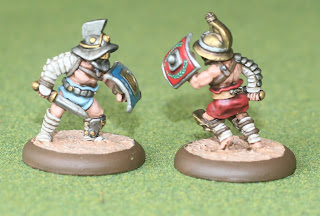 My Murmillo on the left against the Thraex, a traditional enemy. I hand painted the design on the Thraex shield, which is from the North Star Jugula gladiator accessory pack. 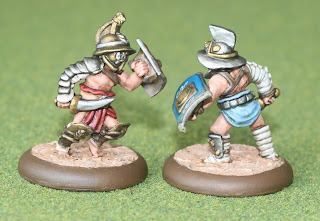 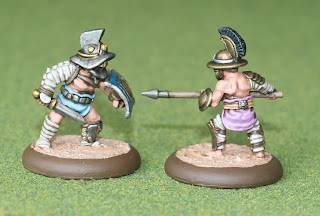 The full lineup so far, more to come. Hopefully I can get some practice games in sooner rather than later.