Years ago I bought some 15mm crossbowmen because I liked the sculpts; they were crossbowmen with "butterfly" pavises strapped to their backs. The figures came from Donnington's New Era Hundred Years' War range, only two poses but very cool. I painted a few samples and bought more packs but nothing more because I couldn't find a ruleset and basing system that I liked. I finally got what I was looking for with Kings of War Historical. I have never played the rules but I like what I see from reading them and watching demos online. They are very simple but allow you to customize troops with "drop in" characteristics. I will tweak them most likely but they give me a framework to begin my project. Here are the first few units: 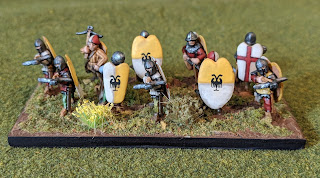 Genoese crossbowmen with pavises. These fiures are Donnington and some Corvus Belli with Corvus Belli pavises glued on to their backs. I came up with the pavise designs from online samples. The imperial eagles are transfers from Veni, Vidi, Vici in the UK. 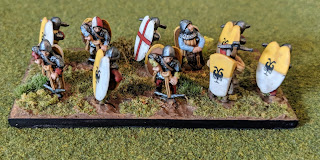 A view from the rear of the base. You can see the other pavise designs. I will probably hand paint some eagle designs for the next batch of crossbow/pavise bases. The bases are 80mmx40mm and considered "regiments" for the KoW rules. Also, in KoW, the pavises give the crossbow units a defensive modifier against missile attacks. 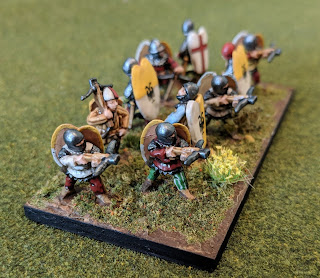 I tried to go with a red, yellow, green and white color palette to tie in the figures.

And here are two units of English longbowmen. All of the castings are Donnington. In Kings of War, longbow units can have stakes to aid in defense against melee attacks. The stakes are brass rod cut to shape. 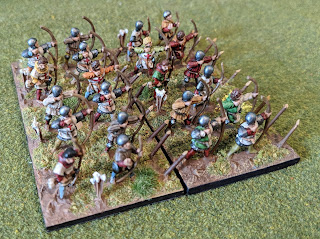 A better angle here. The sculpts are really nice and easy to paint. Some of the sculpts have longbowmen taunting the enemy with a two finger V salute. I painted red Saint George's crosses on their tunics. I also painted some of the sculpts in white or green and white livery colors for the Tudors.