I had mentioned in a previous post that one of the projects I hope to finish off are my Blucher starter armies. I purchased figures for Sam Mustafa's sample scenario ("Along the Danube"), both Austrians and French. I have a good majority of the Austrians done, and the French...well...they are purchased and sitting in bags.My figures are all Old Glory 10mm, which are very nice sculpts in my opinion. I based all "brigades" on a 60x30mm base. The plan is to place a thin 60x40mm laminated cardboard sabot underneath with the remaining exposed 10mm having unit identifiers and stats.

I started trying different painting techniques with these guys. I primed an off white, inked with sepia and then went over the straps and large uniform sections with bright white. I went with speed over detail with the infantry. I was happy with how they turned out.

Also, I apologize in advance for the shoddy photography. With the winter sun, I have a limited amount of natural light and was trying to rush to get some decently lit photos. I may have jiggled a bit with the camera. I ended up tossing alot of photos involving other projects. I will try to revisit these figures when I have more optimal light and steadier hands.

Here are some German infantry in helmet. Each brigade depicts two regiments in the same facings. The figures are on 5-figure strips, each brigade has 6 strips to a base.

Same two brigades from the rear. 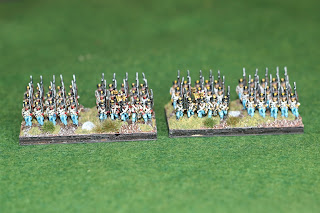 Here are some Hungarian infantry in their shakos and blue pants. I must have accidentally ordered/received French command strips for my Austrian Hungarian infantry. I thought something was odd but painted them up anyway, when i finally looked at the package label I realized my error. You can miniature Austrian Imperial eagles on the fanions. Oh well....

And another rear shot.. 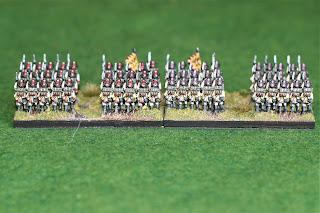 And a rear shot showing their bearskin bags.. 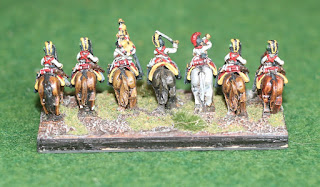