In Her Majesty's Name: The Brick Lane Commune

I rarely paint 28mm, really 15mm are typically the biggest figures I collect and paint. There are a few exceptions and these are for skirmish style games (In Her Majesty's Name, Frostgrave, or an upcoming gladiator project (Nic Wright's card driven "Blood Sweat and Cheers" ruleset). Here is my IHMN company, the Brick Lane Commune, which was an absolute bear to paint. 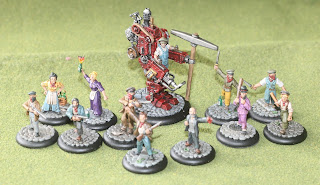 The full company. Because the Brick Laners aren't real scrappers and cheap in point value, I had to add a Walker to bring up the points and give them some extra punch and ranged combat ability. I labored on these guys and dragged my feet in finishing them. Whenever I played my buddy Rob, I was shamed by his excellently painted Lord Curr's Company. I enjoy painting, but I do not enjoy 28mm anywhere near as much as the smaller scales. 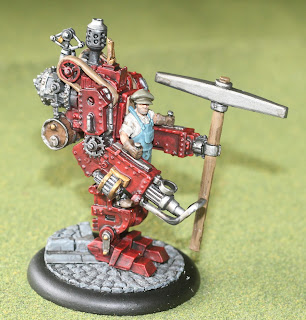 The Walker was incredibly difficult to assemble and came apart a few times. I believe there are about 5 pins and heaps of epoxy glue and crazy glue keeping this hulk together. It was also difficult getting the arms and legs of the machine aligned with the driver. 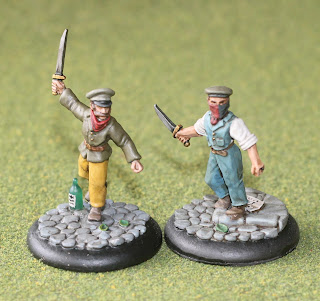 Two knife-armed henchmen. The gent on the left had a miscast right foot so I built it up with green stuff and placed a bottle to hide it. I had grand plans on a complicated plaid pattern for him but I failed miserably in those endeavors, so I settled for a plain ensemble. 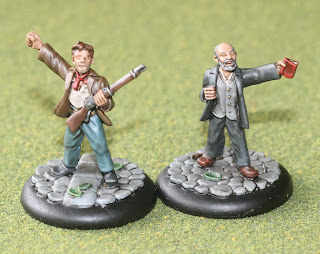 My working class hero and commissar (who looks a bit like Lenin). Simple color schemes again. The bases are resin and were purchased at my local gaming shop. I removed the bases the figures had cast on and used pins to secure them to the bases. The detritus you see on the bases (leaves, paper trash, etc.) are cast on. 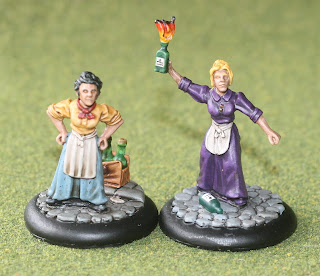 Here are my ladies, armed with some brick lane grenades. I added a bottle on the base of the incendiary on the right. I believe they were from a doll house online shop. They are clear plastic and I painted them with glass paint and painted on labels. I am pleased with the result. 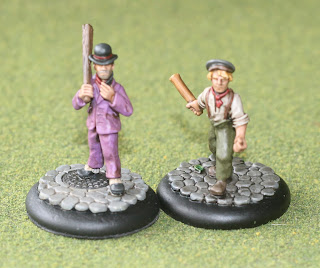 Two club armed anarchists. The purple fellow on the left is probably my favorite sculpt. I gave him a five o'clock shadow. He is in a rather sharp look suit and bowler hat but his face looks that of a thug. I envision he was a former pimp and became radicalized down in the alleys of White Chapel. 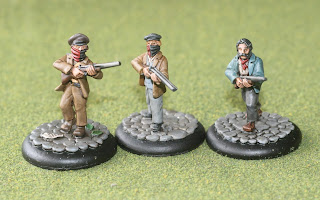 The final contingent are my shooters, armed with double barrel shotguns. Not much range but I will take what I can get with this gang. I opted for a rather drab color palette for the Brick Lane Commune: dingy blues, browns, grays and greens with a few splashes of purple or yellow. I figured these were industrial folk and would be wearing plain clothing. The only reds I used were for the Walker, the Commissar's book and the scarves the folk wear. So far my socialist radicals have yet to taste victory but they are fun to play with.