I don't often paint figures bigger than 15mm and I rarely paint plastics, however I was intrigued with Strelets' "Napoleon in Egypt" range so I picked up a few boxes to make up some French, Mameluke and British armies. I plan to ultimately game with them using the Maurice rules.

I had to travel for work quite a bit this past year and my hours allowed me some idle time. I wanted to be able to get in some painting time so I didn't feel like my work trips were a black hole for my hobby progress. I decided that the Strelets would be the ideal travel companion since they are light and don't really break to easy.

Here are some of the "Light Infantry" which seem to be French in their tropical uniforms. I opted to paint these guys in pink because how many chances does one get to paint pink uniforms and be historically correct?

Here is a closeup, the sculpts are good but some of the details aren't crisp. I primed all of these figures with a gloss black fusion primer. It really bonds to the plastic, and I should mention that I typically rinse these guys with vinegar prior to priming. I read someplace that it gives some bite for the paint to stick to. After priming with black, I drybrush with grey to pick out details and begin painting. 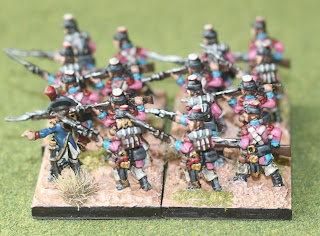 Another closeup of these pink-clad warriors. 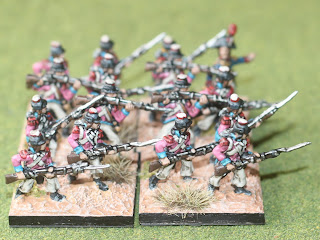 Some French in the more traditional revolutionary-era uniforms of the 1790s. I added some striped trousers for revolutionary effect. 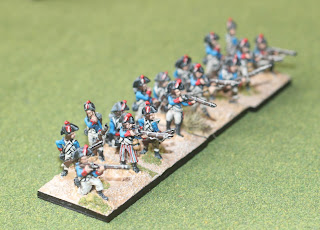 A shot from the rear showing off backpacks and the such...

Here are my four completes units. I tried to keep similar poses in each unit: marching, advancing, charging and firing. At some point I will finish up the French and tackle the British and Mamelukes.